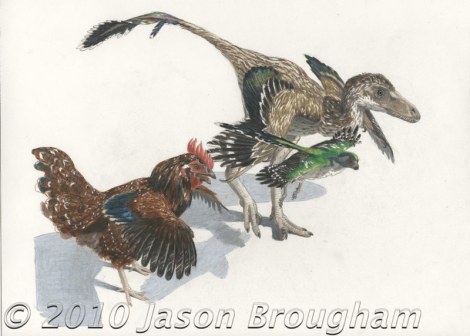 The title is a triple entendre.
1) Dinosaurs turn out to be soft, rather than rough, because they were covered with fluffy filaments or feathers

2) I am particularly interested in the parenting behavior of dinosaurs – with single dads raising large broods of hatchlings. In the popular imagination theropod dinosaurs are just pure meat – gobbling machines, but they pioneered the intensive parenting we see in birds today: nest building and chick supervision. I think of this as their soft side.

3) I am fascinated by the idea that paleontology gets measurements – soundings, or samples – that reflect the biology of dinosaurs. They may give us a strong signal. But  another fossil can be discovered that gives a clearer picture and that contradicts the former conclusions. This makes the field open to endless revision and interpretation. Thus the picture that we get is, in some respects, in soft focus.

One response to “What does “Soft Dinosaurs” mean?”